Sapphires occur in all colors, except for red as that is considered a ruby. The most popular and traditional version of sapphire is the blue sapphire. These stones, most notably the blue sapphire, have been adored and loved for centuries by ancient and modern civilization.

Legends have surrounded sapphires all through history. During ancient Greece and Rome, kings and queens believed that blue sapphire protected them of envy and harm. Sapphire symbolized celestial hope and believed to promote devotion, tranquility and spiritual enlightenment. In the Middle Ages, sapphire was worn by clergymen symbolizing heaven. Other times in history, sapphire was believed to guard chastity, reveal the oracles' secrets, influence spirits and make peace among enemies. Also, many have held this stone in high regard, as it has become a symbol for romance and faithfulness.

The name sapphire comes from the Greek word sappheiros, meaning blue and referred to lapis lazuli. It has been mined since antiquity in Sri Lanka. Deposits have been found in other parts of the world such as Australia, Thailand, India, Burma, Brazil, Cambodia, Kenay, the United States of America and more. 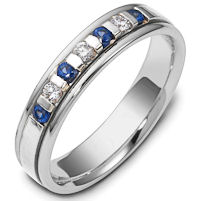 Sapphire is a 9.0 on the Mohs scale of hardness; making it an excellent alternative to diamonds in an engagement ring or wedding ring, especially a colorless sapphire. Diamonds are the only stone higher on hardness on this scale.

Blue is by far the most common and popular sapphire color. However, sapphire does come in an array of colors (a rainbow spectrum), except the deep red which is ruby. Some fancy color sapphires are amethystine or plum sapphires (purple); golden sapphire (yellow or orangy yellow); padparadscha sapphire (pinkish orange to orange-pink) which is also one of the rarest colored sapphires; and white sapphires (colorless).

Sapphire has been used in engagement rings and wedding bands throughout time because of the hardness and ability to mimic diamonds. It also has a symbolism relating to faithfulness and romance adding meaning to a couple's engagement ring and wedding ring.

Finally, sapphires are used as the birthstone of September and for the 45th wedding anniversary, making it a great choice for wedding and anniversary rings. Including sapphire in wedding rings and bands may provide a deeper symbolism and connection amoung a couple's engagement ring and wedding ring.