The word diamond comes from the Greek word "adamas" which means indestructible and unconquerable. Diamonds have thousands and thousands of years of history. They have been fought over, worshipped, used to cast love spells, cure illnesses, poison, and more.

Civilizations throughout history and modern times have different meanings for diamonds. In India, they believed the human soul could pass through various incarnation, animating gemstones as well as plants and animals. Indians also used diamonds in their religious icons. They would use them as eyes in their Hindu devotional statues.

Greeks thought the "fire" in diamonds symbolized the constant flame of love, which gave way to a more romantic meaning. Part of the romanticism included the belief that a simple, single diamond in a ring says all the heart feels. No words or expression was needed when the diamond was presented. It symbolized all the love. 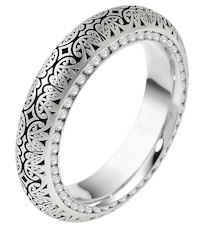 The Greek philosopher, Plato, believed gems were living beings that gave life to spirits. Other philosophers gave a gender for specific gems and declared the ability for the gems to "marry" and procreate.

These are not just the only interesting and unique beliefs behind diamonds. Kings, Queens, and their subjects believed diamonds held special powers. Kings thought wearing diamond studded heavy leather breast plates with other gems during battle would protect them. They also wore diamonds to symbolize strength, courage, and invincibility.

Diamonds also symbolized wealth, power, love, spirit, magical powers, and more. It was believed that diamonds were fragments of stars and teardrops of the gods. This gave way to the belif that diamonds possessed magical qualities of the gods and had powers beyond the understanding of the common man. A reason many warriors and Kings wore diamond studded plates during battle. Another reason people thought diamonds had magical and mystical powers was the ability for some diamonds to glow in the dark (now known as the flourescent or phosphorescent effect).

Other interesting uses for diamonds was medicinal, gardening, and shockingly poisoning. In the Middle Ages, it was used to heal the sick if the person took it to bed and used it to warm their bodies. They would also put the diamonds in the mouths to cure liars and scolds. Diamonds were believed to cure the mentally ill, ward off devils, phantoms and nightmares. People would wear diamonds to protect against poisoning. While on the other hand, diamond powder was used as poison. Catherine De Medici gave out death by diamond powder. In gardening, people believed if they placed a diamond in each corner of the garden, it would protect the garden from lightning, storms, and disease. Another belief was diamonds would cause lawsuits to be determined in the wearer's favor.

All of these beliefs, symbolism, and uses are unique and interesting, but one thing that remained consistent throughout the years was the symbolism of diamonds signified love. Diamonds were symbolized as the ultimate gift of love. Some believed that cupid's arrows were tipped with diamonds that had magic like no other. As the Greeks believed, the "fire" in the diamond expressed all the love the heart felt. A reason many use diamonds in engagement rings, wedding rings, and anniversary rings. View More